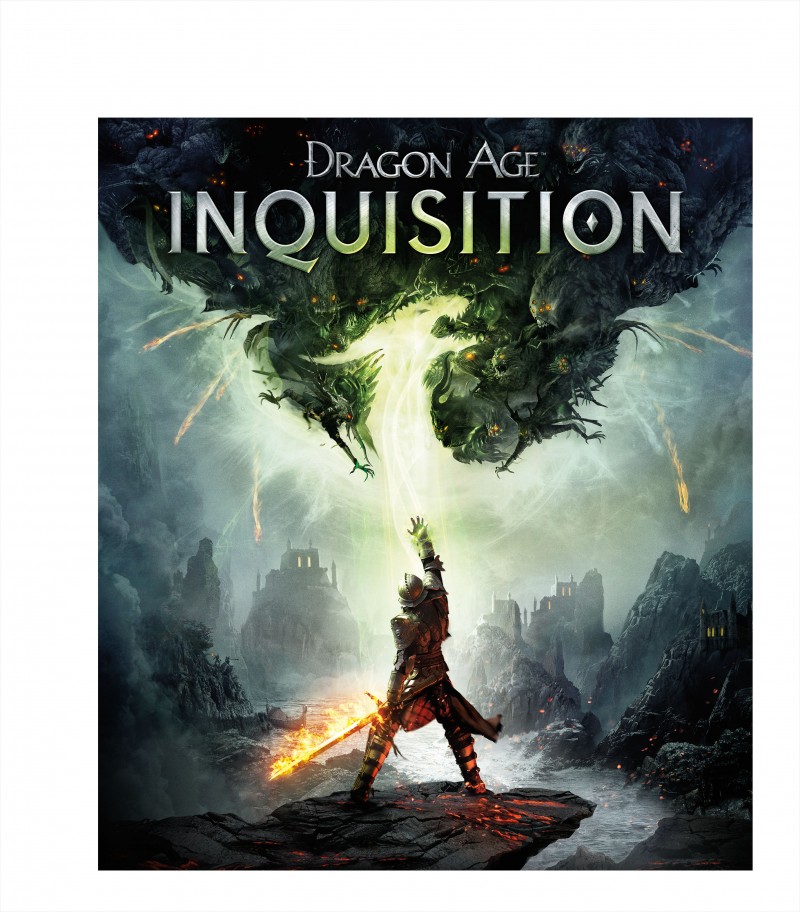 In my first column, I touched briefly on Canadian game developer BioWare and their inclusion of same-sex relationships and queer characters. The Dragon Age series of games is currently one of BioWare’s big titles, and with the newest installment, Dragon Age: Inquisition, debuting this week, I thought it would be a good time to talk about those particular games in a little more depth. There was only one problem, though: I’ve never actually played any Dragon Age games!

…Yeah, so that’s a fairly substantial problem. I guess “expertise” about any of the stuff in this column is debatable, but given my general approach, I’d like to at least have some basis in personal experience.  So for this week, I enlisted some help. Hoping to get an insider perspective – and a range of perspectives, for that matter  – I asked around online, and several queer Dragon Age fans out there were kind enough to tell me about the characters and relationships available, as well as their thoughts on the games.

You can get basic information on the Dragon Age games by poking around online, and anything I could tell you would be gleaned from doing the same thing myself, so I’ll let you read up on them on your own if you’re unfamiliar. Suffice it to say here that they are fantasy role-playing games where you, as a protagonist of the gender of your choice, lead a party of adventurers; your relationships with your party members make up a key component of the game, and in some cases those relationships may be romantic and sexual. The first game, Dragon Age: Origins, included four romanceable characters: a male and a female straight character, and a male and a female bisexual character, so that two opposite-sex options and one same-sex are available regardless of the player’s gender choice. Its sequel, Dragon Age II, however, took a different approach, in which all romances were available to either gender choice by the player. Ostensibly all of these characters could be interpreted as bisexual, but according to several of my sources, few of the characters actually seemed to clearly express that orientation. Apparently, some players complained that this made the romantic options seem instead to be “player-sexual,” and in some cases seemed to remove sexuality as a facet of their personalities entirely, making them instead subject only to the fantasies of the player. Dragon Age: Inquisition, finally, is set to include more romance options – including some outside the party proper – and restrict the availability of some romance options by the player’s choice of gender and fantasy race, more like Origins.

The majority of the fans I spoke with were very pleased by the availability of same-sex options in the games, and in most cases that had been the factor that attracted them in the first place. Everyone I spoke to, however, agreed that while queer characters appeared in the series, dealing with queer “issues” wasn’t really a goal of the games; in the continent of Thedas, where the games are set, queerness seems to be by and large an unremarkable state, characters’ preferences doing little to set them apart beyond deciding which types of players can romance them. In general, though, this is probably a positive for a lot of queer players: sometimes you don’t want to deal with the Big Issues in your fantasy entertainment, and it’s nice not to have it shoved down your throat that being queer is such an outlandish anomaly that it could never be accepted in any culture, real or mythical.

In spite of these positives, however, most of the people I spoke to also agreed that Dragon Age remains far from perfect. A major area where the games have performed less successfully is on trans characters, as Twitter user @serenityfails noted:

Both Dragon Age: Origins and Dragon Age 2 featured a brothel the player character could patronize. The only visibly transgender characters in the games thus far have been prostitutes there, whose identities are played up for laughs.

And according to another fan I spoke to:

[T]he second game has a character in the brothel . . . who I read as a trans woman, although later I saw that the writers had written the character more as a drag queen. She shows up in a brief scene in a DLC that felt like your typical “haha, we found out this minor character likes to patronize THAT prostitute??? How wacky!” moment and it was pretty unpleasant. . . I think in the first game there’s a joke at the brothel about a dude in a dress, but since I had better things to spend my money on than that, I never saw it. Why can’t they just have an option of “hey there’s a hella sexy guy in a dress here, are you interested?” without it being played up for laughs?

While it’s unusual for a game to feature trans characters at all, representation like this isn’t much better than none. Several fans also noted similar problems with bisexual characters, especially early on in the series. As @serenityfails noted:

In Origins, the two bisexual companions were rogues, a spy and an assassin, who had both used their “open-mindedness” and powers of seduction to their advantage professionally. Both are wonderful characters with engrossing backstories and character arcs, but the implications of some of their comments could be a bit squint-worthy at times.

Another fan elaborated on the same point, describing the series’ bisexual characters in more detail:

Zevran (the bisexual male from DA:O) was a cheerfully amoral assassin, whose bisexuality seemed to go hand-in-glove with his nihilistic attitude to life. Zevran, ultimately, just loves pleasure. If it feels good, he does it. With a smile and a wink, he’ll seduce men and women – then probably slit their throats while they sleep. Isabella, (a cameo in DA:O, and a full companion in DA2) is highly-sexed, enabling DA:O’s infamous possible threesome/foursome. Arguably a voice for female sexual empowerment and autonomy, she is nevertheless portrayed as incorrigibly promiscuous, in addition to being a generally selfish, morally-grey character (though she can redeem herself – this is her character arc of DA2).

Unfortunately, I’m sure this is a familiar story to most of us by now in popular culture: gay cis characters are beginning to be included, but trans and bisexual characters are still treated in derogatory or stereotypical ways. Another positive side that was mentioned nearly across the board, however, was how Dragon Age’s development team have responded to criticism – and, in some cases, how they have not responded to it. Even as they noted the problems with depictions of trans and bisexual people in the games, most of the people I spoke to also mentioned that Dragon Age writers had acknowledged and listened to criticisms like these, and already made noticeable efforts to correct the issues in tie-in media since the last game was released. And although some gamers have complained about the same-sex options in the Dragon Age games, lead writer David Gaider – himself a gay man – has delighted queer fans by telling these critics to “get over it.” Whatever errors they may have made, the writers have demonstrated a strong commitment to inclusivity in their dealings with fans, both by listening to those hurt by what they still get wrong, and dismissing those who don’t like what they get right.

It’s partly this commitment, above all else, that has really cemented the loyalty of many of the fans I talked to. As @serenityfails put it:

Seriously, though, BioWare is one of the few big game companies I feel has actually taken the time to listen to my opinion. Their strong relationship with their fanbase means they hear what we tell them in a very direct, personal way. As a person who is used to being told I don’t exist twice over, who is used to being treated like I don’t matter, that’s a big deal.

That communication with fans, and the general attitudes that go along with it, go a long way toward mitigating the issues that have been noted thus far. My impression from all of my conversations has been that the Dragon Age games have set themselves apart in the current gaming industry climate just by making an effort – and that goes for issues of gender as well as sexuality. As one fan described it:

It is SO nice to be the hero AND get the girl (or guy, depending on your preferences). I’ve played RPGs for awhile and it always bummed me out to always have to play as a male, heterosexual, character to have any romance options with the ladies. Representation means a lot, it makes me feel included in a community, it helps me with my immersion in the game(s), it says, “You are welcome here!” Which, especially in gaming, isn’t always the case for people who aren’t straight white males.

[Dragon Age] has also made me realise how closely related gay issues and feminist issues are – because they are both set against a straight, male status quo. The same mindsets keep both female and gay characters sidelined in games – the idea that “Our audience (ie, straight young men) don’t want to see it.” And the thing is, I’m really not sure that’s true. Yes, there are still some regressive fans out there, but far as I have experienced, many male gamers have no problem at all with a female protagonist, and their reputation for gay-friendly RPGs has not hurt Bioware’s credibility as a games publisher.

Indeed, between Dragon Age and the Mass Effect series, BioWare’s games have earned a big name in the industry – while including queer characters and relationships, and allowing characters to play as female protagonists. It’s heartening, in light of some of the conservative backlash that has been seen in gaming circles lately (and that’s a column for another day, if I can muster the bravery to get into it at all), that the Dragon Age games’ popularity has persisted in spite or even because of their forays into queer representation. For queer gamers, at least (and clearly, we do exist!), it definitely seems to be “because.” To many of us who are used to being pushed into pursuing straight relationships in the course of a game’s plot, having the option to pursue a same-sex relationship is a breath of fresh air. As one of the fans I spoke to put it: “I greatly appreciate being able to have gay romances because I rarely can in games. But I’ve saved a damsel in distress more times than I can count.”

Though they may be far from perfect, I think it’s safe to say that the Dragon Age games are something special, and I hope fans are having a good time with Inquisition. As @serenityfails summed it up beautifully:

Dragon Age: Origins is a game where a gay dwarf can get engaged to his elf assassin boyfriend and run off into the sunset with him after they save the world by stabbing a giant purple dragon in the face. That’s pretty magical.

You’re darn right it is. After everything I’ve heard in the course of this column, I’m thinking I may have to give these games a try after all. I hope some of you may have come to feel the same way.

P.S. Many thanks to all who contributed! For everything that’s fantastic, thank them; for anything that got messed up, blame me.