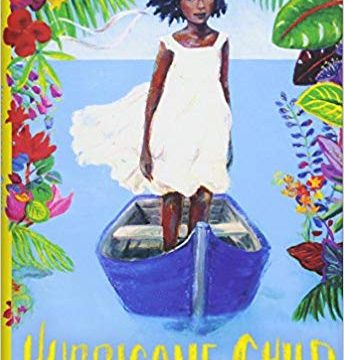 On January 28th, 2019 the Youth Media Awards were held in Seattle during the 2019 ALA Midwinter Meeting. One of the awards announced was the Stonewall Book Award – Mike Morgan & Larry Romans Children’s & Young Adult Literature Award. Author Kheryn Callender was a winner for her book Hurricane Child. Kheryn was kind enough to answer a few questions about receiving her phone call from the committee and more!

Tell me about getting that phone call. What were you doing? How did you feel?

The night is a bit of a blur now, to be honest—I think I might’ve been cleaning, or writing, or watching TV, when I looked down at my phone and saw I had a text message from someone who works at my publisher Scholastic, saying that someone had been trying to call me, and to please pick up the phone if it rings. (My phone is always on silent, so I’d missed multiple calls.) The text message reminded me it was the night before the ALA Youth Media Awards, and I got a rush of nervousness and excitement, but before the emotions could take over completely, the phone started ringing in my hand. I answered it after a few rings, and I heard only a few words from the call itself—“Stonewall” and “award” being the main ones. I started to cry and didn’t hear very much else, but didn’t want to cry over the phone to the poor committee that must’ve been tired—it was late, and I hadn’t been answering my phone—but I was also excited and grateful and completely overwhelmed. That overwhelmed feeling lasted a few days, but I’m still feeling thoroughly excited and grateful to ALA and the entire YMA Stonewall Book Award subcommittee.

Why was it important to you to include LGBTQIA issues and characters in your book?

It’s important to include LGBTQIA issues and characters because readers, and especially young readers, need to see themselves reflected. A lack of visibility can make readers feel literally invisible, which I’ve experienced firsthand for most of my life. That feeling of invisibility can also create feelings of isolation, and it became easy to believe that I didn’t deserve to exist. I never want another young queer person to feel the way that I felt. I want young queer people to know that they are beautiful, and powerful, and loved, and deserve to be in this world just as much as anyone else.

What does it mean to you to be recognized for a Stonewall Award?

To be recognized for a Stonewall Award is an honor I never could’ve imagined, especially when I was Caroline’s age and felt so alone. To see Caroline’s story—and, in a way, my own story—accepted and honored is an emotional validation and affirmation. Now, I’d like to take the opportunity to amplify black, queer voices and stories along with my own. Queer stories and black stories both have a long way to go when it comes to seeing more representation in media, and even rarer, and at times seemingly nonexistent, are intersectional black and queer stories. There need to be more—many more.

Tell me about your next book?

I have another MG and YA, hopefully coming out next year! Neither have been announced, so I can’t give too many details yet, but each book features black and queer characters as well, and I’m really excited for both.

Thank you for having me!