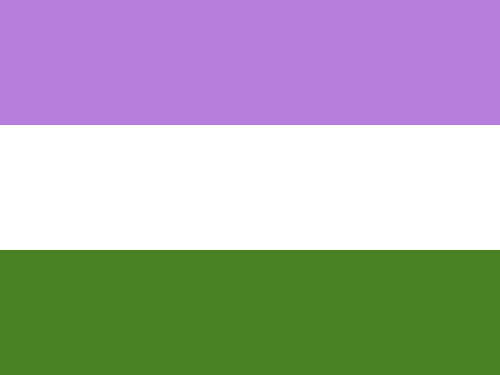 Adjective designating a person who does not subscribe to conventional gender distinctions, but identifies with neither, both, or a combination of male and female genders – Oxford English Dictionary

The term genderqueer is one of many words that people may choose to describe an identity outside or beyond male/female. Others  include agender, bigender, trigender, neutrois, genderfluid, trans*, transmasculine, transfeminine, bear, butch, femme, boi, demiboy, demigirl, genderfree, and androgyne.

The term genderqueer first appeared in print more than 20 years ago (though was undoubtedly used before that date). A short article from the Washington Times in 1995 quoted activist Ricki Ann Wilchins saying, “It’s high time `genderqueers’ came out of the closets, out of the shadows and out of the margins” (2 Oct 1995, A8). While the term gained wider usage after the turn of the 21st century, it was only added to The OED in 2015, and  Merriam-Webster’s dictionary in 2016.