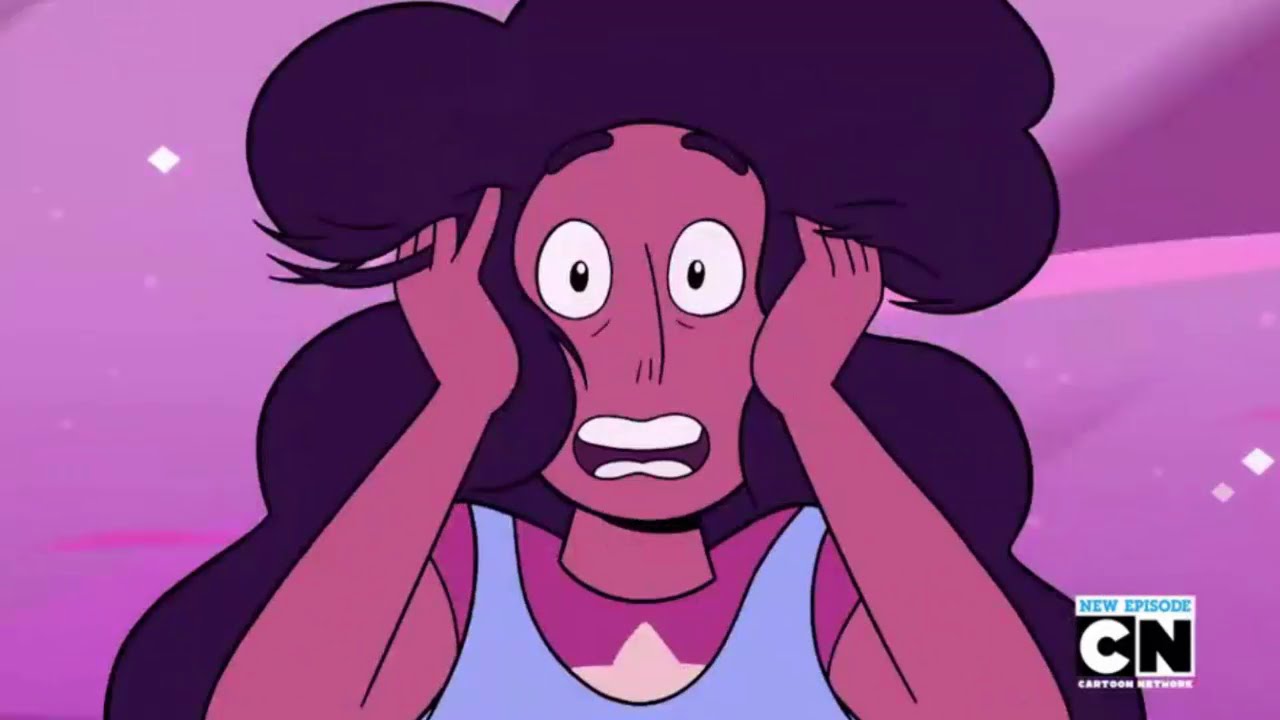 If you feel like I’ve kind of been down on things a lot lately, and sometimes it seems like I don’t really like anything, then today’s column is for you, because today I’m going to talk about Steven Universe.

If you haven’t heard of Steven Universe, you’re not alone; it’s had a rocky road in building its audience, I think just because it’s so different in some key ways from other things on TV. It’s ostensibly an kids’ animated show on Cartoon Network, created and run by Rebecca Sugar, formerly of Adventure Time (making her Cartoon Network’s first ever female show creator, incidentally); but, conscious of Adventure Time‘s and others’ success with appealing to adult audiences as well as children, Steven Universe has in many ways set out to deliberately court that crossover audience. The premise is that the eponymous Steven (who’s based on Sugar’s real-life younger brother) is half human and half Crystal Gem, Crystal Gems being an alien race of magical beings, some of whom dwell on and protect Earth. He lives with three Crystal Gems who were the companions of his Gem mother, who apparently had to give her life for him to be born, and struggles both to understand his own nature and to help the Gems fight off supernatural threats and complete important missions. The story is told from Steven’s point of view, so that as he discovers things about himself and the mysterious world he has to learn to be a part of, so does the audience. As a result, a great deal of information about the show’s worldbuilding still has yet to be revealed, or has only been hinted at outside of the canon by the show’s creative team.

Most important for my purposes here, though, are all the ways that worldbuilding has ended up making the show a surprisingly rich source of queer representation – especially for what’s at least partially a kids’ show. I’ve talked before here about how children’s television is by and large conservative about gender and sexuality, but cartoons tend to have the most leeway to sneak things in; and not only is Cartoon Network’s children’s programming not the most mainstream to begin with, but Steven Universe seems to be enjoying taking every possible advantage of the loopholes animation gets.

For one thing, the show’s creative team have stated often and clearly that the Crystal Gems are a genderless race, though they generally present as somewhat traditionally feminine, are played by female voice actors, and use she/her/hers pronouns. In keeping with the show’s layered approach, this plays out in queer-positive ways on a couple of levels. On the meta level of adult fans keeping up with this information, it’s nice to see characters nonbinary and genderqueer folks can at least sort of identify with, and to see a piece of media move away from binary, heteronormative models of gender, let alone talk about what happens with pronouns at that point. But – maybe more importantly – to the mind of the average kid watching the show, the Gems just read as all being women. So viewed from this perspective, Steven Universe becomes a show: with a large number of women, the vast majority of whom are voiced by women of color; where women are the smart, strong, cool heroes looked up to by a young boy; and focusing in large part on relationships between women, including romantic ones. A key, recurring plot point is that Gems can “fuse” with each other to create a single person combining the characteristics of both, and near the end of the first season it’s revealed that Garnet, one of the Crystal Gems who have raised Steven, is actually herself a perpetual fusion between two Gems so in love they couldn’t bear to exist separately. This is interesting from an in-world, science fictive perspective, sure… but the main thing that a kid will see in that episode, even if they miss those nuances, is two women in love on a television show, and that fact in and of itself treated as no big deal.

I’ve also written about how frustrating it is when gender diversity is used to make aliens more alien, though, and it could be argued that to some degree Steven Universe falls into that trap. It’s able to mitigate this issue somewhat, though, through the character of Steven himself, who is played as very human in spite of the alien qualities he possesses, and with whom the viewer is always invited to identify. The things the Gems can do are also things he can do (if not always in predictable ways), and while he does have a gender and it’s male, the show finds ways that the Gems’ default femininity and complication of gender can carry over to him. The biggest example would be the much-discussed episode “Alone Together,” where Steven succeeds in using his Gem fusion ability by accidentally fusing with his very human best friend and possible crush, Connie. They combine into a single being dubbed “Stevonnie,” who is apparently older, taller, stronger and more graceful, and ambiguously gendered – and the subject of a great deal of romantic and sexual interest from people of all genders, very suddenly for a person who’s actually two early adolescents. Sugar has discussed Stevonnie in interviews both as a challenge to audiences’ gender expectations, and as a metaphor for puberty and the budding of adolescent sexuality. And both experiences, of the disturbance of developing into adulthood and of finding oneself outside of expected gender categories in the process, are normalized and humanized by being presented through Steven’s (and Connie’s!) eyes.

Sure, Steven Universe isn’t 100% perfect on everything; much about the show’s internal history and universe still hasn’t been revealed, but there are some legitimate critiques to be made about the plot point of Steven’s mother’s sacrifice, and it’s tricky to laud it as a paragon of queer representation when there are so many caveats to be noted about that. If it truly is one of the most queer-positive cartoons on television, that may indicate a sort of low bar for cartoons on television. But everything I’ve heard from its creative team indicates that, even as it has its stumbles, its heart and brain are definitely in the right place, and I’m confident that it will only continue to grow better. After all, it’s still young, and maybe more important than its queer positivity is just that it’s a really good show, thoughtful and sensitive and clever, able to be silly and fun but also dive into movingly sophisticated depictions of grief and relationships and family – both biological and chosen. These are kinds of stories that queer kids (and adults) need too, in addition to normalizing and modeling gender difference and same-sex love. Having a bunch of queer representation is great, but it only goes so far, if that’s the only thing a piece of media has going for it. But true to his name, Steven and his friends have a whole universe of stuff to offer. Especially if you have kids, but also if you don’t, I’d definitely recommend tuning in.

1 thought on “Queer Quest 11: The Universe Next Door”