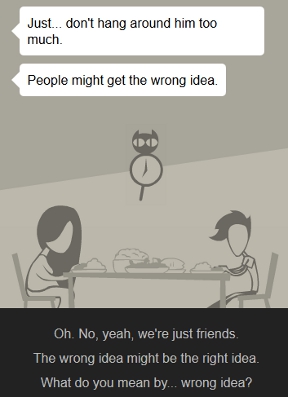 Indie game designer Nicky Case has developed Coming Out Simulator 2014, a free online game that simulates the process of coming out. The game is based on Case’s own coming out process, and it allows the player to choose a variety of conversational choices throughout the storyline. Characters remember what you have said, and they constantly refer back to choices that were made previously in the game. The games tagline is “a half-true game about half-truths.” The game has three endings, but like it promises at the very beginning, there are no easy or clean results. Everything is messy…just like the coming out process itself.

Case described a bit of the game in a blog post:

Â â€œWhat really, really mattered to me, was all the touching responses I got sent to me via Twitter and email. I had no idea Iâ€™d be so moved. People in the closet, people already out, parents who want to support their kids, ex-boyfriends of closeted peepsâ€¦ all reached out to me.

â€œI was worried, at first, about putting out such a depressing story about coming out. It might have the negative consequence of scaring teens into not coming out.

â€œBut it turned out, by really diving into the deep end, my game could reach out to people in a dark place. I donâ€™t think it could have reached them if the game was all sunshine and rainbows.

The game can be played here.