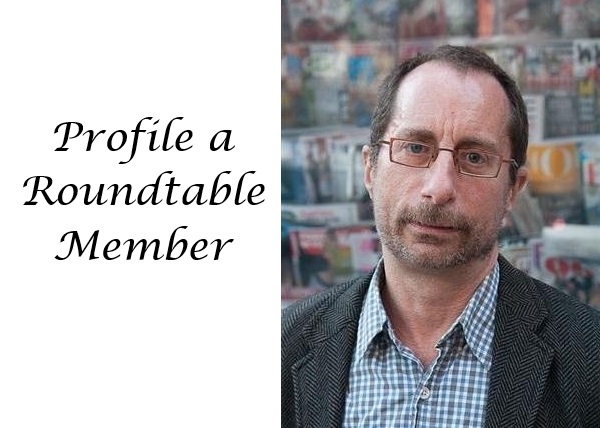 David is the Vice President, Editorial Director at Simon & Schuster Books for Young Readers. Heâ€™s worked for S&S for over twenty years. His passion is finding new writers and helping them grow.

A member of GLBTRT, he attends the socials and the Stonewall Book Awards brunch celebrations whenever he can. He is very proud that many of the books he has edited have been honored with Stonewall Book Awards and Lambda Literary Awards, including (most recently) Better Nate Than Ever by Tim Federle, Aristotle and Dante Discover the Secrets of the Universe by Benjamin Alire Saenz, and Putting Makeup on the Fat Boy by Bil Wright.

Obviously, he reads a lot. He loves theater, both on- and off-Broadway, and prefers plays more than musicals. He considers himself â€œsomething of a foodieâ€ and loves discovering new restaurants. He also loves to travel. This summer he went to Alaska for the first time and really enjoyed his first cruise there.

When I asked if he was an animal, what animal would he be, he said that others have compared him to a terrier because he can be fierce when he needs to be. He much prefers the idea of being a panda bear, however. Sleeping and eating all day does sound awfully appealing!

If David could have a dinner party with five culturally or historically significant figures, living or dead, he would invite Oscar Wilde, John Waters, David Sedaris, Pedro Almodovar, and Keith Haring. He says â€œI think that evening would be full of wit, sarcasm, genius, creativity, and sheer intelligence.â€ I agree!