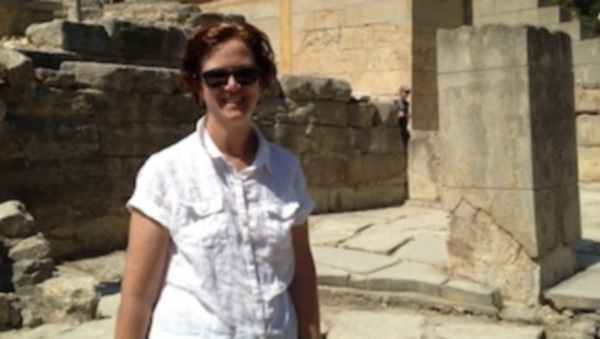 Lisa has served the GLBTRT since 2001 as a member of the Stonewall Book Awards Committee, Chair of the Stonewall Book Awards (the first year they were included in the Youth Media Awards), representative to the ALA Diversity Council, Chair of the now defunct Nominating Committee, and Book Review Editor. She considers the round table her official home within ALA. A full professor, Lisa is the Associate Director of Sweet Briar College Library, a small women’s college in rural Virginia. There are a lot of expectations at a small college library, and she does everything from acting as an embedded librarian for the Art History Department to moving books. It’d be easier to ask what she doesnâ€™t do there! Lately, sheâ€™s been an integral part of the current library renovation project at Sweet Briar, which will be completed in September 2014 (hopefully without injury).

Lisa claims to be the librarian stereotype: a bachelorette with three cats and a lot of great friends.Â  Sheâ€™s happiest when sheâ€™s traveling. She was assistant librarian for the summer 2013 voyage of Semester at Sea and wants to return to the program. She also would like to serve on an IFLA committee. Her passions are learning about different cultures and LGBTQ rights worldwide. Â And Downton Abbey.

Her other goals are to learn Spanish, travel to more Latin American and South American countries, find out more about Latin American studies librarianship, and someday retire to southwest Mexico where she could work to establish village libraries through an NGO. Her spirit animal is the macaw: they live in warm climates and active communities, theyâ€™re intelligent, they wear bright colors and eat tropical fruit all day, and–best of all–they can fly!

I asked her who she would invite to a dinner party with five culturally or historically significant figures, living or dead. According to Lisa, it was the most difficult question of the interview. She didnâ€™t want to break up any shouting matches so she picked Frida Kahlo, Oscar Wilde, Emma Thompson (her celebrity crush), Queen Elizabeth I, and Jan Morris. Sounds like quite the fabulous gathering!