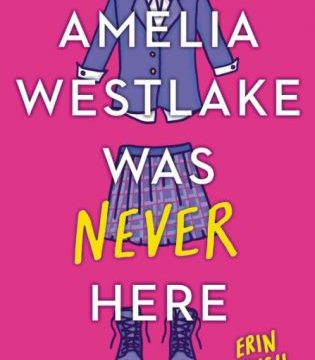 Will Everhart is a troublemaker. Harriet Price is a prefect. The only thing they have in common at Rosemead private school for girls is that they both think something needs to be said about Coach Hadley, the prized staff member at Rosemead who keeps making inappropriate comments to the students. After accidentally collaborating on a comic about his behavior, the two create a pseudonym, Amelia Westlake, to get the comic printed in the student-run newspaper. Amelia quickly becomes the talk of the school, and Will and Harriet find it hard to resist using Amelia to right all the injustices of the administration. Another thing they find hard to resist? Each other.

Amelia Westlake Was Never Here is a fun and engrossing YA novel that manages to be about social justice without being exhausting or didactic. Will and Harriet take on sexual harassment, systemic bias, and economic privilege, all while maintaining their own separate journeys that are relatable and not without fault. Harriet imagines that those in positions of authority know best, preferring not to rock the boat even when she is the one being mistreated. Will is abrasive about every injustice, imagining the worst of everyone and not realizing her own biases. The two main characters are each other’s perfect comedic foil, but they also come across as real people.

Many YA novels featuring LGBT characters rely on “coming out” as a main point of tension—not so with Amelia Westlake. In this much more creative set-up, Will and Harriet are both openly gay but both assume that the other is straight and has a boyfriend. Their already-dealt-with sexuality ends up being an irresistible point of tension that is much more exciting than a rehashed “coming out” moment. While “coming out” stories are still valuable, it’s great to see the lives of queer teenagers being reflected beyond that one event. Instead of realizing they’re gay or being bullied for it, this book shows instances of toxic relationships, tepid parental acceptance, false allies, and discrimination by the authorities. These are real and ongoing themes in queer teens’ lives, and they are perfectly woven into an otherwise silly story about finding solidarity and making a positive difference in the world by pranking the fools in charge.

A great read for anyone looking for smart lesbian YA set in the real world, fans of queer girl fiction who want more than coming out narratives, and those who love stories of teens banding together it to stick it to the man. Of the many LGBT+ books I have read, I can’t think of another like this, though I would recommend it to those who enjoy books that weave social issues into an otherwise lighthearted plot like The Fashion Committee and Beauty Queens, and anyone who liked the relationship drama of Tell Me Again How a Crush Should Feel and The Difference Between You and Me.