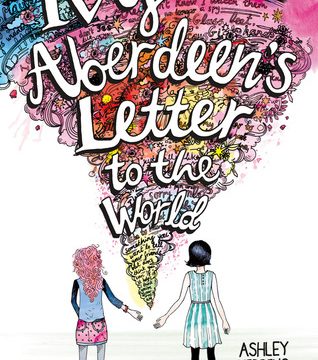 On January 28th, 2019 the Youth Media Awards were held in Seattle during the 2019 ALA Midwinter Meeting. One of the awards announced was the Stonewall Book Award – Mike Morgan & Larry Romans Children’s & Young Adult Literature Award. Author Ashley Herring Blake received an Honor for her book Ivy Aberdeen’s Letter to the World. Ashley was kind enough to answer a few questions about receiving her phone call from the committee and more!

Tell me about getting that phone call. What were you doing? How did you feel?

The phone call was unforgettable. It was Sunday night and I had just finished putting my kids to bed. I sat on the couch, ready to read or watch some TV and my phone rang. I don’t usually answer number I don’t recognize, but I knew ALA Midwinter was going on and the only thing I could think as I stared at the number was “No way.” But of course, I answered the phone and it was the Stonewall Committee. When they told me IVY was an honoree, I was shocked and overjoyed. I couldn’t believe it. With all the amazing LGBTQ+ books published this year, I couldn’t believe they’d selected mine as one to honor. After the call, my editor called me and then my publisher’s direct of school and library marketing called from Seattle and the whole team at Little Brown cheered in the background. It was all so overwhelming and lovely.

Why was it important to you to include LGBTQIA issues and characters in your book?

What does it mean to you to be recognized for a Stonewall Award?

It means the world. That might sound a little trite, but it’s true. I honestly grew up running my thumb over those circular stickers awarded to books by the ALA and that my book now has one is a dream come true. More than that, however, is the weight of this award’s name—that I can write a book like IVY because of those long before me, those queer women of color and trans people, who fought for their humanity to be recognized. I do not take that lightly and consider it one of the greatest honors of my life.

Tell me about your next book?

My next book is another middle grade novel and it’s called The Mighty Heart of Sunny St. James. It’s about a girl who receives a heart transplant and afterward, she makes a New Life Plan to find a new best friend, do exciting things she’s never been able to do before when she was sick, and kiss a boy. But then her estranged mother comes back into the picture and, as she grows closer to her new best friend, a girl named Quinn, she starts to wonder if she wants to kiss a boy at all. It’s about second chanced, first love, and how family and love can take many forms.

Thank you so much for helping get the right books into the hands of kids!