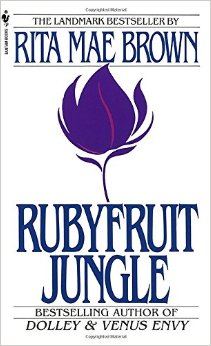 Golden Crown Literary Society (GCLS) is pleased to announce thatRubyfruit Jungle by bestselling author Rita Mae Brown (Bantam Press) has been selected as the 2015 winner of the coveted Lee Lynch Classic Book Award.  The award will be presented at the Annual GCLS Literary Awards Ceremony, July 25, 2015 in New Orleans, during the GCLS Annual Literary Conference.

Brown’s first novel, Rubyfruit Jungle, is still in print over 40 years since its original publication date in 1973. She has spent her life as both a writer and a political activist, who was known for her outspokenness about the need for recognition and inclusion of lesbians in the feminist movement.  Brown is the author of more than 40 novels, two collections of poetry and nine screenplays.

“Rubyfruit Jungle was a trailblazing literary coup at publication. Born of Rita Mae Brown’s radical feminism, social consciousness and humor, it was the right book at the right time then and continues to seduce lesbian readers well into the 21st century,” says trailblazing author Lee Lynch.

“In Rubyfruit Jungle, Rita Mae Brown has given us all the gift of a brilliant, brave, and witty superstar—an iconic character who burst upon the scene right when we needed her most. Moly Bolt will continue to amuse and inspire women for generations to come,” says Ann Bannon, who is known for her classic lesbian novels of the 1950s and 60s.

Award winning author and editor Katherine V. Forrest says, “In her high spirited, unforgettable depiction of the gutsy, confident Molly Bolt, a lesbian fiercely and wondrously herself, Rita Mae Brown not only gave us our first lesbian heroine, she gave us gay pride before we had the words.”