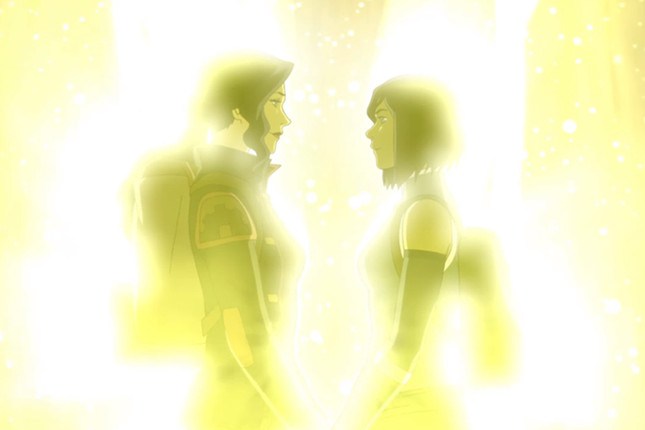 Last column, I talked about how our conservative television culture tends to classify any hint of LGBT themes as strictly “for adults,” and how frustrating that is. As has been pointed out, age-delimiting sexually explicit material is one issue, but the taboo on any discussion of queer issues on children’s TV prevents even providing positive representation or support for queer youth. And while other media aimed at children and adolescents that do include representations and discussions of queerness have begun to emerge, particularly print works, television for young people remains more or less compulsively heteronormative.

Or does it? This past December saw the series finale of The Legend of Korra, the sequel series to Avatar: The Last Airbender: both long-form animated dramas set in a fantasy world inspired by East Asian martial arts films, aired on Nickelodeon with a stated target demographic of about 6- to 11-year-olds, although with many fans of all ages. Korra already had the distinction of featuring a young woman of color as its titular main character, and subplots of the series had occasionally focused on her involvement in straight romance. The end of the finale, however, implied a romantic relationship between Korra and her female friend Asami: showing the two of them gazing fondly into each other’s eyes, and holding hands as they set off on a new adventure together.

The content was admittedly ambiguous, but the intent was not: the series’ two creators, Bryan Konietzko and Michael DiMartino (who have always maintained a very conversant relationship with their fan base), both published blog posts shortly thereafter clarifying that yes, that was what they meant, and why they felt it was important. Both touched on issues of representation and the need to reach out to queer fans, as well as the limits on depicting same-sex relationships in children’s television. While Konietzko readily acknowledged that the move was hardly a “slam-dunk victory for queer representation,” he expressed his hopes that it was nonetheless a step in the right direction, too.

In some ways, Korra isn’t entirely without precedent here. Where taboos exist in children’s television generally, children’s animated television has long seemed able to slip around them occasionally, if only a little. A scholarly article in the Journal of Homosexuality, “The Boy Who Would Be Queen: Hints and Closets on Children’s Television” (Dennis, 2009) examined instances where queer themes sometimes slip unnoticed into children’s television, and found they most frequently appear in animation rather than live-action programming. Some of this may just be because more children’s programs are animated than not, but I don’t think all of it. There’s a measure of greater freedom in cartoons, without the weight (and potential threat) of real actors’ real physical bodies involved, when it comes to all issues of sexuality. They get away with things other shows wouldn’t even try.

This isn’t even true just of cartoons for children, for that matter; some of the most outrageous, envelope-pushing adults’ shows on television (for better or worse, I should point out, I’m not going to be the one holding up Family Guy as a beacon of progress) have always been animated ones. If you go looking for the first male/male kiss on a television show, you’ll find the general consensus is that it was Dawson’s Creek in 2001… but I remember reading an article in 1997 (maybe in TV Guide? I can’t quite remember) that pointed out that at the same time the coming-out episode of Ellen was receiving so much hype, the Simpsons episode “Lisa the Skeptic” included Smithers kissing Mr. Burns in a fit of passion in the face of what seemed to be an apocalypse, and nobody batted an eye. The lists of landmarks always specify a “passionate” kiss between two men when they identify Dawson as the ground-breaker, and it’s fair to exclude homophobic jokes and, say, Bugs Bunny smooching Elmer Fudd. But the Smithers kiss itself wasn’t entirely played for laughs, and the joke wasn’t really that it was between men – it was that a person harboring a secret infatuation showed his hand in the heat of the moment, and then an anticlimax made things awkward afterward, something one could imagine being played the same way in a heterosexual context. It still seems odd that it slid by unnoticed – except, as the article pointed out at the time, for the fact that the rules are different for cartoons. A drawn character can get away with saying and implying far more than their flesh-and-blood counterparts ever could.

There’s an argument to be made, of course, that it still isn’t good enough. Critics have pointed out as much in the context of Korra‘s finale: hints and innuendo may be nice, but they aren’t the same as solid, explicit representation. And of course they aren’t – but I’d argue that they shouldn’t be dismissed too quickly, either. Like it or not, while other media may be stepping up to the job more successfully, television’s ubiquity makes it a critical site for representation, especially when it comes to young people. In the field of child psychology, there have been arguments made that television isn’t just a form of entertainment for children: it’s actually a key force in how kids get socialized, right alongside parents, peers, and authority figures. The values that children absorb from television have a role to play in their development, and we can’t just give kids’ TV up, as a medium, for lost. And that being the case, in what’s in many ways a hostile programming environment at present, every little bit helps.

I know how frustrating just a little bit of representation can feel: sometimes even more so than none, especially when straight, cis creators are being lauded as heroes for taking just the tiniest of steps. It’s frustrating when Korra‘s big same-sex relationship is just a hint; it’s frustrating when J.K. Rowling talks about how Dumbledore is gay or “of course” there are LGBT students at Hogwarts, when the books themselves are finished and none of it has any tangible impact on the story. We want better, and we deserve it, too. But more productive than excoriating folks who have done a little, I feel, is remembering that “a lot” will be a long process. Especially with children’s media, and children’s television, the barriers have been in place for a long time, and are deeply entrenched, and will take more work to dismantle than one person can do at a time. Of course it’s important to remember that Korra isn’t the end of the road, and not treat it as though it is. But it’s a stone in the road: one animated children’s series, doing what it could, when it could. And that’s not nothing.

3 thoughts on “Queer Quest: The Legend of Korra and how cartoons crack closets”