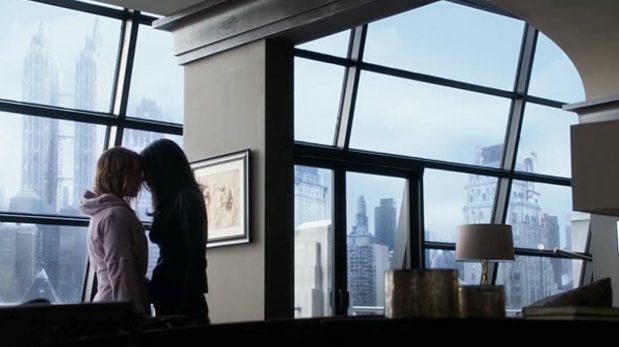 Having written about Constantine last column, I thought it’d be only fair to move on to another comic-to-television adaptation that’s been in the news for issues of LGBT representation. Gotham, Fox’s new Batman prequel/reboot, got some attention earlier this fall when executive producer Danny Cannon confirmed the show would include Detective Renee Montoya, an out Latina lesbian in the comics, along with appropriate representation of her sexuality. Interested to see how this would play out, I watched the first six episodes of the series (not all that’s come out, but it seemed fair considering that Constantine was only in its fifth episode at my time of writing). Results were… well, mixed.

Gotham itself is doing well, and it probably deserves it: it’s well-done, much acclaimed for its cast and its visual direction.  I have to say I might not have chosen to watch it if it weren’t for this column, but that’s mostly because given current events, I have a hard time enjoying a show that sometimes ventures uncomfortably into treating police brutality like a minor, necessary evil that gets the job done, objectionable only to the very most high-minded and idealistic. In many other respects, it’s an engaging watch, and I at least appreciate the relatively diverse cast, and its choice to make the main new character added for the show, Fish Mooney, a Black woman. Comparisons to the Batman movies are inevitable, but I was a devotee of Batman: The Animated Series as a kid in the 90s, and personally I feel like Gotham is more of a spiritual successor to that show than any of the various film adaptations, or even comics canon: it seems to share some of the same stylized aesthetic, where elements of its visuals, costuming, and dialogue evoke a classic noir feel, even as the story is set firmly in the present day. I’ve even come to suspect that the show may be specifically trying to target (among others) people like me: adults in their 30s or so who grew up watching the animated series, and have that element of nostalgia to play on.

Whether that’s true or not, though, Gotham takes every opportunity to make it plain that it’s not for kids. This is firmly in the gritty reboot category, with onscreen violence, death, drug abuse, and the occasional foul language already well represented in just the first few episodes. It’s a little funny that Gotham is taking an adult approach to a comic often regarded as being for kids at the same time Constantine seems to be repackaging a far more adult comic toward a younger audience, but it’s nothing new on the Batman end, of course. Batman comics themselves have grown progressively darker and grittier as the comics industry has grown, and there’s been no shortage of adaptations in the past that have aimed at mature audiences. On that count, Gotham is more falling into step than blazing new trails. Nonetheless, though, the specter of the old “comics are for kids” stereotype always seems to hang around, especially for superhero comics, and at times Gotham seems to be feeling the pressure to prove itself as a serious, “adult” drama.

Furthermore, maybe it’s just me, but it often seems like the show’s representation of sexual diversity is primarily in service of that goal. Montoya’s past relationship with Barbara Kean, Jim Gordon’s future wife, has been gradually revealed as a major plot point, and it does serve to drive the police intrigue of the first season and seem poised to develop both female characters further in the future – which would be a positive, certainly. But though it may be too soon to judge, without knowing more about the characters involved, the show goes to lengths to stress the same-sex nature of the relationship that sit uncomfortably with me. When the relationship is revealed to Gordon, the fact that “she’s a woman” (referring to Montoya) seems to be brought up over and over again: with Kean asking if that’s why Gordon is angry about the revelation, and later admitting it was part of why she hid it. It’s a little thing to stick on, maybe, but it felt to me like an attempt to play up the relationship as a source of shock value for its own sake. Similarly, when Mooney is auditioning a femme fatale to help stage a coup on her gangster boss, there are two scenes where she asks young women their sexual preference (actually a touch I appreciated) and then invites them to pretend to seduce her as if she were one of the men they prefer. The stronger candidate engages her in a long kiss that is definitely more about titillation than representation, although that’s something we’ve probably all come to expect in mainstream media by now. In any case, the main message I took away from all of these elements was the same: you see this? We may be working with a superhero canon, but this show is for grownups. (Mostly straight male grownups, at that.)

There are a couple of reasons why that bothers me. First is that it appears to subscribe to a common idea that I find troubling: that things that are only for adults are inherently better than things that are okay for kids. A piece of media that’s “adult” can be that way for two reasons: because it contains objectionable material that kids don’t have the context and maturity to cope with, or because it deals with subjects and concepts that are beyond the experiential and intellectual range of a kid. The two are often found concurrently, but they are absolutely not the same thing – even though our culture seems to equate them much too readily – and it’s the former that Gotham seems to be trying to use to prove its maturity. I’m not puritanical about violence and sexuality in media by any stretch of the imagination (I already said I love horror movies, for heaven’s sake), but they certainly don’t automatically make it more worthy or more sophisticated, either. There are plenty of things I wouldn’t want a child to watch that I wouldn’t consider worth watching myself, and more than a few thoughtful, nuanced, challenging pieces of art that I’d be happy to show to my ten-year-old niece. This pervasive idea that superhero comics are for kids is annoying, and inaccurate, but it doesn’t have to be a condemnation, and adaptations don’t necessarily need to pull too hard in the other direction to be successful.

Second, and more important, is that if Gotham is using inclusion of queer issues to prove itself for mature audiences, as it appears, then that implicitly categorizes any discussion of those issues as “for adults.” That’s also not an uncommon attitude, especially in mainstream media and especially from conservative critics, but it is a very damaging one. Of course I can understand limiting explicit expressions of same-sex sexuality onscreen just as much as opposite-sex ones, but the idea that children shouldn’t encounter any representation of same-sex relationships at all is a piece of conservative rhetoric that film and network alike seem to have adopted, and that is not only false but harmful. As we know, there are plenty of kids who struggle with elements of queer identity, during and before adolescence, and to make queer representation of any sort taboo for them leaves them even more isolated than they may already be by peers or hostile family situations. And hostility is all too common, unfortunately, even among young children. If kids are getting called anti-gay slurs in elementary school, but all positive mention of gay people is scrubbed out of the TV and movies they consume, what does that tell them? What message does that send? Furthermore, if elementary-aged kids are old enough to use the derogatory words on each other (and trust me, they are), shouldn’t they be old enough to know what they mean? Of course, kids may encounter queer issues in other settings beyond visual media; children’s books, for example, have made significant and encouraging inroads in this area, and ironically enough, that includes comics. (Montoya was, after all, a lesbian in the comics before she was on TV – regardless of whether or not that decision was part of the Batman comics’ own drive to become “more adult.) But television and film still seem to lag significantly behind, and it’s disappointing to see Gotham conform to the “not for kids” idea so closely, even if only by implication.

How much is the implication really there, though? A lot of this is very subject to interpretation, I’ll readily admit. Am I being too critical? Am I seeing things that weren’t intended? I don’t know. It’s possible. But the attitudes are so common that it almost doesn’t matter. For me, television and mainstream film always seems to be a game of “at least,” as far as representation of all kinds goes. At least they tried. At least that’s something. At least it wasn’t any worse. So many pieces of media get away with no real representation at all that any effort seems to become significant. It’s a sad state of affairs, but you take what you can get, I guess.

So in the end, Gotham is a pretty good show, and is pretty diverse, comparatively speaking. I should probably keep watching it and see how things develop further, and where it goes from here. I mean, at least it has recurring main characters of color, who are smart and have agency and get to play an active role in the story. At least it has a lesbian character and a bisexual one in its main cast, and actually made its queer characters recognizable on the screen. At least that’s a start. At least that’s something.

1 thought on “Queer Quest 6: “Gotham” and the problem of “for grownups””